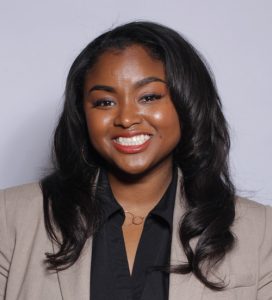 Evelyn has always been drawn to people, entertainment, and business. She is a caring individual who volunteers with woman shelters and food banks while faithfully attending social events such as charity fundraisers and bike rallies. She shares in the excitement of many sports fans as her favorite football team, the Texans, or soccer team, the Houston Dynamo, scores a goal or a touchdown. Evelyn is not only interested in the game; however, but the intricate details of the bargaining agreements between players and teams, the contracts that went into hosting this event, and the sponsors that were involved in making the event that fuels her passion for practicing law.

Evelyn has traveled the world working in various fields and for large companies. Before law school, she worked in the service industry where she worked in various Fortune 500 companies such as for Walt Disney World Parks and Resorts, McDonald’s, and Xerox Corporation. Here she gained experience for guest satisfaction and how to understand and then provide the basic needs for each client she encountered. Thereafter, she worked for the Equal Employment Opportunity Commission (EEOC), the Department of Justice (DOJ), and various law firms to provide peace in the community, mediating employment disputes, and advocating legal rights. She went to travel on international level to Rio de Janeiro, Brazil where she worked in the first Sports and Entertainment law firm and negotiated player salaries and contracts, challenged arbitrators, drafted appeals before the sport’s governing bodies, and help prepare for the FIFA World Cup 2014. Evelyn has never been afraid to travel and take on a new task in any new country or city she has never ventured to before.

Over the years, Evelyn has learned that no matter the facet of law or the type of industry, each has similar challenges and common provisions that need to be addressed on a legal side without compromising politics or business goals. She embraces these challenges by thinking outside of the box and using her past experiences and education to address the needs of any task she is faced with.

Evelyn Ogundana has received a Bachelor’s degree in Business Management and a Master’s degree in Global Business Management from the University of Phoenix. Thereafter, she obtained her Juris Doctorate from Texas Southern University’s Thurgood Marshall School of Law in Houston, Texas. Wanting to add more credentials behind her experiences, she then pursued her second master’s degree, an LL.M. in International and Comparative Sports Law from ISDE/St. John’s University School of Law Queens, New York. Evelyn hobbies include traveling, cooking, and living an active lifestyle.